Yesterday was a big day for LOFAR-UK. The station at Chilbolton was officially handed over (as per an earlier blog report) and was also officially opened by Dame Jocelyn Bell Burnell in a ribbon cutting ceremony out in the field. 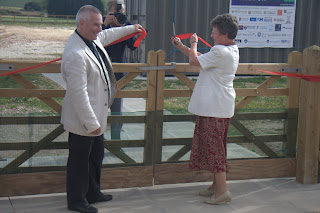 This ribbon cutting was followed by real time observations of one of the brightest pulsars in the sky (thanks to Aris Karastergiou from Oxford Univ. who had worked very hard and set up some impressive computing to process the data to show us in real time). Jocelyn seemed very pleased to see the telescope worked, and was very excited particularly about it's potential to detect new transient radio emitters. 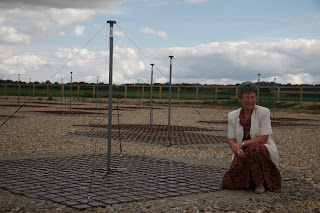 After the Chilbolton event was a celebratory event held at the nearby Intech Science Centre. Rob Fender (LOFAR-UK PI, Southampton Uni), John Womersley (STFC), Mike Garrett (ASTRON) and Derek McKay-Bukoswki (Chilbolton Station Project Manager) all gave talks, and then Jenny Shipway (Intech Planetarium Manager) gave us a wonderful planetarium show specially adapted to include links to LOFAR science. I think I can speak for most astronomers in the room by saying that we don't get to see planetarium shows very often, and it was a wonderful reminder of the inspirational science behind why most of us got into this game in the first place.

Also we had cake. 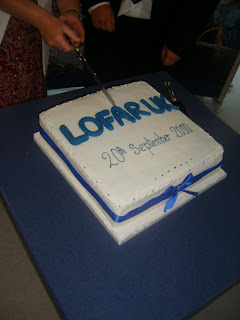 Well done to everyone involved.
Posted by Karen Masters at 2:11 PM