There's a fairly active discussion of LOFAR going on in the comments of the Slashdot article about LOFAR which was posted yesterday. Just putting the link here in case anyone wants to join in.

LOFAR on Slashdot
Posted by Karen Masters at 9:50 AM 1 comment:

During the opening ceremony at the LOFAR-Chilbolton Station last September, one of the groups filming was Motherboard.TV. They have now released the below video on LOFAR (link):

You can also watch the 40 second trailer for the video on YouTube:

LOFAR in the Andover Advertiser

Some very local press on the first image from LOFAR including Chilbolton - from the Andover Advertister, a local newspaper in the area of Hampshire where Chilbolton is located. 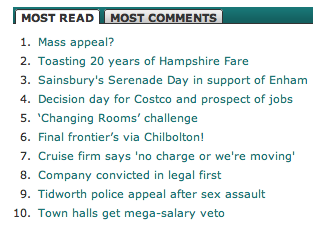 Not only there, but the 6th most read article today.
Posted by Karen Masters at 12:28 PM No comments:

Welcome to LOFAR in Ireland 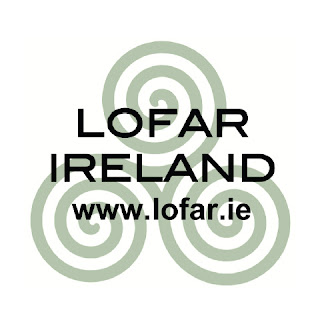 We extend a welcome to the LOFAR community to our colleagues in Ireland.

There is a new website for 'i-LOFAR' — a LOFAR station in Ireland. This is a new proposal for another international LOFAR station, to be located at Birr Castle. At station placed here will extend the longest baseline of the LOFAR International Telescope even further.

Once again, this historic site will be associated with the largest telescope in the world... the LOFAR International Telescope. (And, this will be the first LOFAR station with a castle!)

Visit the LOFAR Ireland website at: http://www.lofar.ie/
Posted by Karen Masters at 4:32 PM No comments:

LOFAR - the Largest Telescope in the World....?

The International LOFAR Telescope (ILT) claims to be the largest telescope in the world..... why?


Once you move to "virtual telescopes" like this though, there are several different ways to describe the size of the telescope. The most obvious is the width of the array (the largest distance between two antennas in it). This sets the resolution of the images your array will take (the sharpness, or zoom level if you like). Then there's the surface area - basically how much of the area inside your array is covered by radio antennas or dish. This helps to set the sensitivity of the telescope - the more of the radio signal you can collect the fainter the objects you'll be able to see. And finally there's how many different antennas you have. Some arrays are made of a small number of fairly large radio telescopes, others (like LOFAR) have a larger number of smaller antennas arranged in stations.

So how does LOFAR compare with some of the other radio interferometers out there. Well I have collected some numbers in the below table. As you can see LOFAR (or the ILT to use the proper name) is one of the largest in terms of maximum dimension - however both the US and European VLBI (Very Long Baseline Array) facilities have larger sizes by that metric. But LOFAR easilly beats everything at the moment in terms of the number of antennas, number of stations, and (effective) collecting area. So it can really claim to be the largest telescope in the world.

Of course larger facilities are being planned. LOFAR in many ways is a pathfinder for the SKA (Square kilometre array - the name of which refers to the goal of having 1km^2 collecting area (1 million m^2). The details of exactly how this will be achieved are still being worked out, but it's likely to involve very large numbers of antennas. Also in the construction/design phase are many other similar facilities like ASKAP (The Australian SKA pathfinder), MWA (The Murchison Wide Field Array) and LWA (the Long Wavelength Array) all consisting of large numbers of dipoles arranged in stations (edit: thanks to John Swinback for pointing out ASKAP is actually an array of 36 12m dishes - not dipoles).

So LOFAR's claim to be the largest telescope in the world likely won't be true for long. We live in exciting times for radio astronomy.


Table comparing properties of LOFAR (ILT) with other currently running large radio telescope arrays (note that that other facilities listed below also work at shorter radio wavelengths than LOFAR).

(b) 31 stations "completed" as of Feb 2011, 9 more under construction. Current status: http://www.astron.nl/~heald/lofarStatusMap.html

(c) This is wavelength dependent for dipoles. Numbers based on Discussion of LOFAR effective area on ASTRON website.

(d) Largest dimension at present is Tautenburg-Chilbolton which is 920 km.

(e) Still to work out. Need to find specs for each dish.
Posted by Karen Masters at 10:39 AM 2 comments:

I just learned that a sister project to the LOFAR LBAs (low band antennas) is underway in the US. This project is called the Long Wavelength Array (LWA) and like our LBAs uses large numbers of spindly looking antennas to survey the sky at 20-80MHz (radio frequencies below the FM band down to the limit of what will pass through our ionosphere). As part of the LWA project, a nice write up of the motivations for low frequency radio astronomy appeared online last week: "An Astronomers Field of Dreams".

They're in the middle of putting together their first station, and hope to begin observations this summer. For more details see the LWA website. 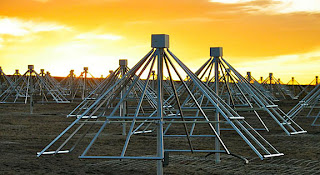 Multiple antennas of the LWA-1 station of the Long Wavelength Array in central New Mexico, photographed at sunset. Each antenna stands about 1.5 meters (5 feet) high and about 2.7 meters (9 feet) across the base. Image credit: LWA Project (at UNM).
Posted by Karen Masters at 9:28 AM No comments:

Here is a collection of links (not complete) of various articles covering the first light image. If you have a link you'd like to add let me know in the comments.

Should start with the original press releases from ASTRON and STFC.


Now a very incomplete list of articles in languages other than English:


German (thanks to my German office mate for the translations)


Chinese
Posted by Karen Masters at 10:47 AM No comments:

First images from LOFAR including Chilbolton

You can find the ASTRON release here.

This is the STFC release put out by LOFAR-UK (on the STFC website here).

In the quest to discover more about our Universe and the birth of stars and galaxies, a new UK telescope connected for the first time to others across Europe has delivered its first ‘radio pictures’. The images of the 3C196 quasar (a black hole in a distant galaxy) were taken in January 2011 by the International LOFAR Telescope (ILT). LOFAR (Low Frequency Array), which is co-ordinated by ASTRON in the Netherlands, is a network of radio telescopes designed to study the sky at the lowest radio frequencies accessible from the surface of the Earth with unprecedented resolution.

The UK based telescope at STFC’s Chilbolton Observatory in Hampshire, is the western most ‘telescope station’ in LOFAR. The addition of Chilbolton to other stations in Europe makes the LOFAR array almost 1000 km wide – ten times as large as the original array in the Netherlands – and creates the largest telescope in the world.


“This is a very significant event for the LOFAR project and a great demonstration of what the UK is contributing,” said Derek McKay-Bukowski, STFC/SEPnet Project Manager at LOFAR Chilbolton. “The new images are three times sharper than has been previously possible with LOFAR. LOFAR works like a giant zoom lens - the more radio telescopes we add, and the further apart they are, the better the resolution and sensitivity. This means we can see smaller and fainter objects in the sky which will help us to answer exciting questions about cosmology and astrophysics.”


“This is fantastic”, said Professor Rob Fender, LOFAR-UK Leader from the University of Southampton. “Combining the LOFAR signals together is a very important milestone for this truly international facility. For the first time, the signals from LOFAR radio telescopes in the Netherlands, France, Germany and the United Kingdom have been successfully combined in the LOFAR BlueGene/P supercomputer in the Netherlands. The connection between the Chilbolton telescope and the supercomputer requires an internet speed of 10 gigabits per second - over 1000 times faster than the typical home broadband speeds," said Professor Fender. "Getting that connection working without a hitch was a great feat requiring close collaboration between STFC, industry, universities around the country, and our international partners.”

“The images show a patch of the sky 15 degrees wide (as large as a thousand full moons) centred on the quasar 3C196,” said Dr Philip Best, Deputy LOFAR-UK leader from the University of Edinburgh. “In visible light, quasar 3C196 (even through the Hubble Space Telescope) is a single point. By adding the international stations like the one at Chilbolton we reveal two main bright spots. This shows how the International LOFAR Telescope will help us learn about distant objects in much more detail.”

LOFAR was designed and built by ASTRON in the Netherlands and is currently being extended across Europe. As well as deep cosmology, LOFAR will be used to monitor the Sun’s activity, study planets, and understand more about lightning and geomagnetic storms. LOFAR will also contribute to UK and European preparations for the planned global next generation radio telescope, the Square Kilometre Array (SKA).
Posted by Karen Masters at 4:00 PM No comments: