Anyone who follows LOFAR (or me) on Twitter probably knows that LOFAR has been well represented at the UK National Astronomy Meeting (NAM) taking place in Llandudno, Wales this week. LOFAR-UK decided to run an exhibit stand to try to educate the UK astronomical community about LOFAR in general and the UK involvement in LOFAR specifically.

Below is the picture of the stand we put up, with 3 large LOFAR-UK banner posters and LOFAR-UK bookmarks (made by SEPnet, who also provided some pencils, postcards and post-it notes to give out), a computer playng a DVD of some of the different LOFAR-UK videos we have on YouTube, brochures describing LOFAR in general (kindly provided by ASTRON), a leaflet about the Chilbolton observatory (provided by STFC), LOFAR-UK pens and post-it notes designed by yours truly, plus printouts of two of the recent press releases (First Light Including Chilbolton Station, and the First Peer Reviewed Science Result from LOFAR) and some other pictures. 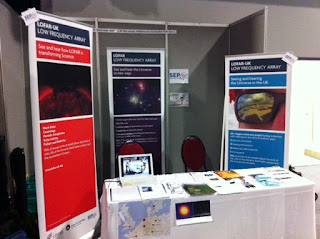 Here's a picture of all the give-aways. The pens were a definite hit (described as the best freebie at NAM), and we have just a handful left to giveaway tomorrow (the last day of the meeting). 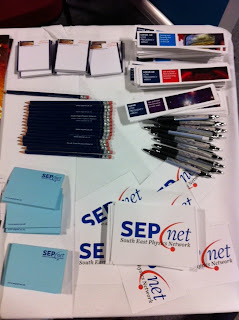 We also took along a demo low band antenna (LBA) which I'm holding in the below picture. We have used this to illustrate the technique behind putting up the antenna several times at coffee and lunch breaks, and also to the team from the Astronomy Now YouTube Channel. 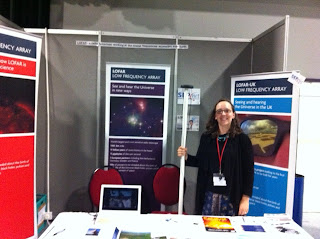 There has been some definite interest, and I have given interviews about LOFAR (and LOFAR-UK) for the Jodcast, The Naked Scientist, the Sky at Night vodcast and Astronomy Now YouTube channel. So stay tuned for those.

Other LOFAR related events at NAM included a talk by Christian Vocks on observing the Sun with LOFAR (with some interesting information on the Potsdam LOFAR station), plus a plenary lecture on EISCAT-3D (a project using some similar technology to LOFAR).

All in all I think it's gone very well, and I want to say thanks to all the members of the LOFAR-UK community who have helped me to "man the stand" this week. They have included Emma Rigby, Melanie Gendre, Lyndsay Fletcher, Rob Beswick, Somak Raychaudhury, Paul O'Brien and Paul Alexander.
Posted by Karen Masters at 10:20 PM