Official hand over from ASTRON

On the morning of 20th September 2010, just ahead of the official opening, the delegation from ASTRON arrived at Chilbolton Observatory to review the progress and hand over the LOFAR station formally to STFC and LOFAR-UK. Part of this included an inspection of the site and the comments were all extremely positive concerning the professional work done, efficiency of the build and the final presentation and attention to detail. During the handover meeting itself, Corina Vogt (the ASTRON representative) said that the only thing she had to say about the field was "Wow!" 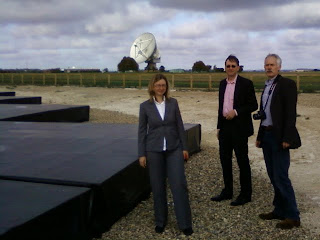