LOFAR is a large new radio astronomy facility in the final phases of construction and commissioning. It will be the largest low-frequency radio telescope in the world, and is the major pathfinder for the low-frequency component of the Square Kilometre Array (SKA). The science case for LOFAR is extremely diverse, from planetary astrophysics to galaxy formation to the epoch of re-ionisation, facilitated by its multiple very large fields of view and resultant unparalleled survey speed.

LOFAR-UK is a consortium of astronomers with the goal of constructing and operating one or more antenna stations in the UK forming a key part of the International LOFAR Telescope across Europe. The consortium represents over 20 British universities, making it the largest radio astronomy collaboration in the country. More than 70 leading UK astronomers are directly involved in the project. Since 2005, LOFAR-UK has raised £1.2M from its member institutions independently of the research councils. We have been engaged with, and multiply-reviewed by STFC, as funding was sought for additional UK stations, technical development effort and, crucially, the bulk of the operating costs for the first station, dominated by the costs of data transport to the supercomputer in The Netherlands. All the various STFC panel recommendations have been for significant funding for the project. With the support of STFC, LOFAR-UK's independent funds were therefore used to purchase the first station, sited at the STFC facility at Chilbolton.

Our most recent request to STFC was therefore for running costs for this station, now under construction. These costs are at a level around 0.1% of the total current ground-based astronomy award, and this extremely modest operational budget would enable the UK astronomy community to participate in over 40% of the science from the International LOFAR Telescope, a 200MEuro facility, giving an extremely good return on STFC's investment. During the response to the STFC funding crisis, LOFAR-UK was reviewed by both the Far- Universe- and Near-Universe Advisory Panels (FUAP and NUAP respectively) as well as the Ground-Based Facilities Review (GBFR). All three panels rated the project extremely highly; in an open poll of UK astronomers, which was published in the GBFR, LOFAR-UK was rated as the sixth (out of 26) most important facility for UK astronomy over the next 10 years (only ESO facilities [ESO, VISTA, ALMA and E-ELT] and SKA R&D were ahead of it).

However, on Dec 16, LOFAR-UK was informed by STFC that there will be no funding of the project by the research council. This puts the entire project, and with it any UK involvement in LOFAR, in jeopardy.

LOFAR-UK will campaign to get this decision by STFC reviewed as soon as possible.
Posted by Karen Masters at 4:33 PM No comments:

Check out this press release from the Max Planck Institut for Radio Astronomy at Efflesberg describing the first all-sky map of the radio sky made with a complete LOFAR station in the HBA (high band antenna) 110-190 MHz freq. band.

Posted by Karen Masters at 9:59 AM No comments:

An interview I recorded with BBC Radio Solent reporter Matt Treacy last week during the LOFAR LBA test installation at Chilbolton aired this morning on the local Hampshire radio. It will be available for the next 7 days on the BBC iPlayer at this location: iPlayer link (about 45 minutes into the show).
Posted by Karen Masters at 12:31 PM No comments:

Owain Davies (the STFC LOFAR Station Manager at Chilbolton) is leaving STFC at the end of December for a position in the Earth Stations Engineering Group within Inmarsat. In his last status report about LOFAR (edited version below, which is actually a combination of his Dec 7th and Nov 23rd reports found in full for the LOFAR-UK scientists on the LOFAR-UK Wiki) he says:

"It is with regret that I bid farewell to LOFAR at this stage, particularly as it was moving in to the phase that I was most looking forward to. Chilbolton LOFAR was the first project where STFC entrusted me with the role of project manager and the skills and experiences I have gained during this time have been of great benefit to my other areas of work at Chilbolton over this past year."

Owain has handed over his role to Mike Willis from STFC/RAL (Rutherford Appleton Laboratory). Mike has managed various radio wave propagation contracts from Ofcom and is also an active participant in the ITU (International Telecommunication Union). Prior to taking the role of LOFAR Station Manager, Mike had been investigating Recognised Spectrum Access (RSA) status for the Chilbolton site. Derek McKay, the SEPnet Commissioning Engineer, will also continue to shadow the LOFAR Station manager as well as working on SEPnet activities.

Two deliveries of the LOFAR kit have been accepted at the Chilbolton Observatory. In the car park there is now the LOFAR container, the LBA (low band antenna) ground planes and the weed suppressant foils. Inside the Chilbolton main building is the electronic equipment which will go inside the container, the LBA antennae, and the LBA and HBA (high band antenna) cables.

HBA Tiles: Delivery of these parts are tricky to organise, as they need to be stored carefully and they are quite large. ASTRON are keen to deliver some of the tiles over the winter, with the rest warehoused in the Netherlands. STFC/Chilbolton are keen to accept the tiles and possible storage solutions are being investigated.

In the below picture from the main LOFAR website, you can see HBAs in the foreground (and LBAs in the background) - obviously very different designs for the two wavenlength ranges for LOFAR. 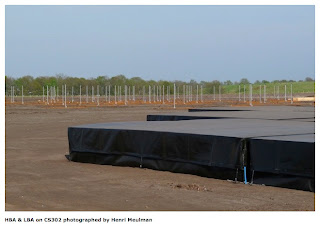 The STFC design specification for the Chilbolton LOFAR site is complete, and it is with the contractors for pricing and scheduling. Expect news on this in the next status update.

Intech is a hands-on interactive science and technology centre, administered by the educational charity, The Hampshire Technology Centre Trust Ltd, with the specific purpose of promoting the knowledge and understanding of science, technology, engineering and mathematics (STEM). It is located 20 minutes drive from Chilbolton and has good links to the M3 and Winchester train station. A Holiday Inn is being built next door to Intech and will be open in March 2010. The Intech planetarium will seat 170 and offers an excellent venue to enthuse an audience in the work that LOFAR-UK will do.

Posted by Karen Masters at 10:49 AM No comments:

A team of LOFAR-UK scientists went to Chilbolton this Tuesday to try to build some LBAs (low band antennas) on site. In the end we put up four antennas in two teams of four. Here's the team behind one of the finished antennas (note for this test we did not use the ground sheets, nor are the antennas at the final LOFAR location - they are instead on the test range - much closer to the main buildings). 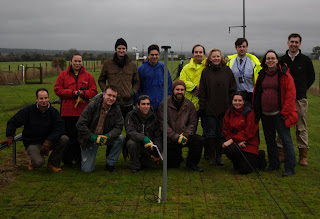 Here's a picture of all 4 antennas we built. 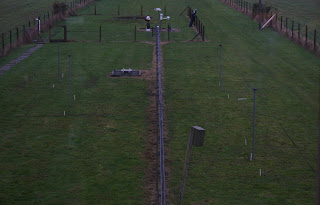 Here's one of the teams finishing off an antenna while I talk to a BBC Radio Solent reporter in the background (more in that soon hopefully). 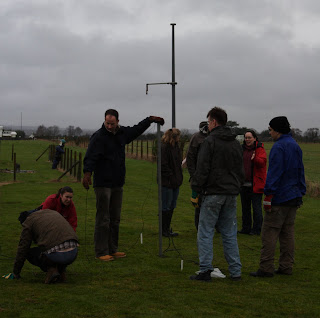 We were able to connect up one of the antennas to check the signal - in effect getting "first light", at least from a single LOFAR antenna at the Chilbolton site. It was an exciting moment for us as you can see. 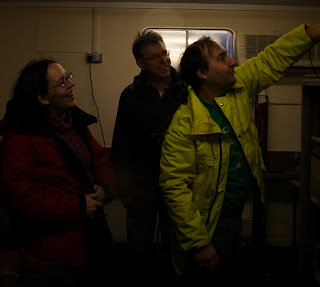 And here's what we were looking at! 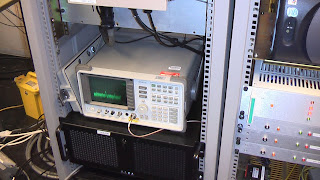 (thanks to Judith Croston for most of the pictures I posted here today).
Posted by Karen Masters at 7:34 PM No comments:

What will LOFAR see?

Courtesy of BrentJens on You Tube, a sneak peak of the radio sky above LOFAR.

All sky movie of the radio sky above the LOFAR prototype near Exloo, The Netherlands, at a frequency of 50 MHz. The data were taken at 29 and 30 April 2008. The edge of the circle is the horizon. North is up, East towards the left. The movie shows Cas A and Cyg A twinkling (scintillating) like stars, as well as the Galactic centre rising and setting. Near the end of the movie, there are thunderstorms over Germany visible towards the east. The total duration of the observation was 24 hours.

Posted by Karen Masters at 10:31 AM No comments:

Mark your diaries - the Chilbolton LOFAR(-UK) station will be officially opened on July 1, 2010 by Dame Jocelyn Bell Burnell.
Posted by Karen Masters at 10:29 AM No comments: