LOFAR on the Map of GPU Computing.

Of possible interest to those involved in LOFAR is this map of the GPU (Graphical Processing Unit) computing usage for research. The LOFAR Epoch of Reionization Key Science project makes it onto the map in Groningen where GPUs are being used for signal and image processing of the data generated by LOFAR for this experiment. 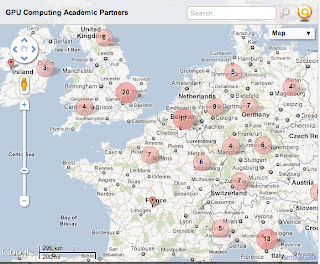 Posted by Karen Masters at 11:35 AM No comments:

The UK National Astronomy Meeting, to be held in Manchester in March 2012 will host a session on "LOFAR, the LOw Frequency ARray: Ongoing Developments and Early Results" preliminarily scheduled for 10am on Thursday 29th March 2012.


"The LOw Frequency ARray (LOFAR) is a next-generation radio telescope which utilises thousands of stationary dipoles and tiles to observe celestial phenomena. This session is intended for the broader community to learn about the developments of LOFAR including updates on the status of the system and its current scientific capabilities, the early science results from all aspects of its applications and operation, as well as the upcoming opportunities for general "open skies" observing.With its dense core array and interferometric baselines of up to 1,000 km, LOFAR has the potential to achieve both unparalleled sensitivity (sub-mJy) and spatial resolution (sub-arcsecond) in this largely-unexplored low-frequency radio regime (~10 MHz to 250 MHz). Areas of science which can be explored with LOFAR include, but are not limited to, the Epoch of Re-ionisation (EoR), Pulsars, Transients, Cosmic Rays, Magnetism, deep Extra-Galactic Surveys, and also studies of the Sun, the Solar Atmosphere/Solar Wind, Space Weather, and the Earth's Ionosphere. In summary, the session is designed for showcasing LOFAR's scientific potential and progress to date. The session should include a LOFAR overview and specifics of LOFAR commissioning, current status, scientific and technical capabilities, and upcoming opportunities. We solicit contributions from any/all of the science areas that will be covered by the observational capabilities of LOFAR."

Posted by Karen Masters at 1:37 PM No comments: