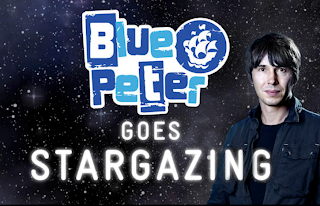 Unfortunately they didn't visit the LOFAR-UK station, but you can see the Greenwich Observatory's Public Astronomer, Dr. Marek Kukula visit the Chilbolton Observatory (home of LOFAR-UK) to talk about tracking space debris with the 25m dish on the special episode of Blue Peter made to tie in with the BBC StargazingLIVE series. (watch on iPlayer).
Posted by Karen Masters at 11:28 AM 1 comment: 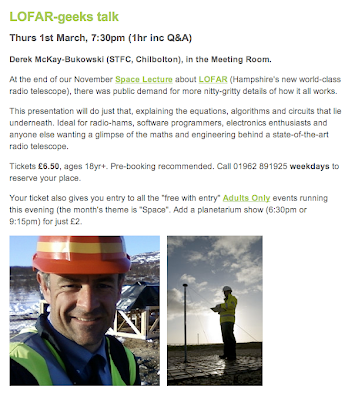 By popular demand following the Intech Space Lecture on LOFAR last November, Derek Mckay-Bukoski will give a second talk at Intech on LOFAR focusing  on the technical aspects of the project.

Please see the below advertisement for a PhD position at the University of Southampton, which is open to any EU student.
The deadline for applications is February 29th. Click for more details.

The variable ionosphere is a calibration issue for both radio astronomy and the RF communications industry, causing both retardation and absorption of radio signals as they pass through the atmosphere. These effects are dependent on the temporal and spatial distribution of total electron content (TEC) in the ionosphere. Their impact varies as a linear function of wavelength, and so signals at low frequencies are most affected. This consideration is consequently an important factor in the calibration of very low frequency radio telescopes such as the LOw Frequency ARray (LOFAR) where such effects are further complicated by the wide reception patterns of the LOFAR antennas, which are substantially larger than the scale of ionospheric fluctuations. A consequence of this fact is that traditional self-calibration techniques for radio astronomy, which rely on reception patterns smaller than or approaching the size of ionospheric fluctuations, are no longer sufficient and a more detailed modeling of the ionosphere is required to completely correct for contaminating effects. Moreover, the recovery of polarization information from astronomical Faraday rotation is dependent on corrections for the absolute ionospheric density along the line of sight, in addition to the relative values required for imaging. Models based on long-term, statistical records can provide useful indications of time-averaged ionospheric conditions, but are generally not suitable for accurate representations of the ionosphere at any in- stant. This is because the short-term variability of the ionosphere regularly causes its morphology to differ from time-averaged conditions. At present, the most numerous and easily accessible ionospheric data come from the international network of ground-based GPS receivers. However, the spatial and temporal sampling of available GPS data is sufficient for neither complete calibration of radio astronomical measurements nor reliable ionospheric modeling. However, linking real-time GPS data to the data reduction of telescopes such as LOFAR, as well as linking ionospheric monitoring using known radio sources to tomographic inversion of the ionosphere from GPS measurements will provide advantages to both disciplines.

The project will make use of the LOFAR Chilbolton station SEPCAM instrument as a riometer for measuring absolute differences in ionospheric fluctuations from the diffuse all-sky radio background, as well as data from the combined International LOFAR Telescope in order to measure small-scale fluctuations through their effect on the astrometry of known radio sources as a function of time. These data will be combined with GPS-based ionospheric modeling tools to look at comparisons between satellite-based and astronomy-based ionospheric measurements. These techniques will be combined into a real time ionospheric correction and prediction network linking the LOFAR Chilbolton data reduction pipeline and the GPS based MIDAS ionospheric inversion tool. This network will have the dual purpose of improving astronomical calibration through linked GPS measurements; and improving ionospheric modeling through the use of astronomical measurements. The student will use the SEPCAM riometry data to tie down the absolute ionospheric levels over LOFAR Chilbolton and their long and short term behavior. These data will be combined with constraints from polarized astronomical sources with known rotation measures to provide a details of the temporal and spatial variation in absolute ionospheric TEC. This absolute measure can then be used as a prior on the local absolute ionospheric TEC, and combined with the relative astrometric disturbance of a grid of known bright radio sources, the student will develop an inversion to be implemented through the MIDAS framework to recover a 4-dimensional ionospheric tomographic mapping of the local ionosphere, which can be compared and combined with GPS based inversions
Posted by Karen Masters at 11:44 AM No comments:

Yesterday evening (UK time) scientists from the LOFAR headquarters at ASTRON had a press conference at the American Astronomical Society meeting happening this week in Austin, Texas. They presented some of the first science results from the International LOFAR Telescope (ILT) and announced the start of the first All-Sky Survey. You can watch the below webcast of this press conference on the AAS website.


The below is the press release which went out at the same time as the conference. It is also available in Dutch at the NOVA (Nerderlandse Onderzoekschool Voor Astronomie) website.

Today's ASTRON image of the day is this lovely shot of last month's lunar eclipse taken over a LOFAR station near Exloo by radio astronomer Megan Argo.

During the night of 2nd-3rd Jan 2012, gale force winds over the UK resulted in some damage to the LOFAR international station UK608, located at the Chilbolton Observatory near Winchester in Hampshire. Wind speeds at the site exceed 60 mph (97 km/h) accompanied by heavy rain, as a major low pressure system began to pass over the UK.
Chilbolton staff working in the main building (about 1 mile from the array) noticed a dislodged HBA (high band antenna) cover on the morning of Jan 3rd 2012. A HBA tile is made up of 16 antennas held in place by white polystyrene cells all covered by a thick black weather proof cover, making a dislodged cover dramatically visible from a distance.
Fortunately only one of the HBA tiles lost its cover, but 10 of the antenna "cells" within this tile lost their lids exposing the delicate antenna parts to heavy rain and damaging some of the internal structure. Debris was also blown all over the fields around UK608.
Unfortunately the LBA (low band antenna) array fared much worse. In total thirteen of the 96 antennas have been damaged or destroyed. Two of these antennas were completely blown away (including the metal grids), and eleven have been blow down. A further four antennas have been dislodged and may be partially damaged.
Chilbolton staff members should be thanked by all of us for extraordinary effort during the ongoing severe weather yesterday (gale force winds and torrential rain) to mitigate further damage and collect debris.  They have been hard at work again today further securing the damaged array, as the UK is not out of the weather yet with moderate to strong winds forecast for the next 24 hours.
Work is also ongoing to assess the full extent of the damage, particularly to the LBA array, and make plans for the repairs. However the design of a LOFAR station is such that it can function at almost full efficiency with a few antennas down. So while the loss of a full HBA looks dramatic, it should only have a minor effect on the data quality in the high band. And the remaining (up to) 83 functioning LBAs (or 86% of the antennas) should also be able to make successful observations.
Posted by Karen Masters at 2:59 PM 1 comment: