You know the drill...

The original plan was that there would be four drills operating at the LBA field, to put in the pilot holes for the anchor pegs. This is a tricky job, and a bit dangerous as the drills can jam and twist in the rocky soil. However, by the time the work was due to commence, there was only a couple of people trained up on the task and then there was only a single drill available. So Harry Smith started the task of drilling the anchor pegs and continued alone at the task until nearly the end, when we could ease the pressure on other areas and give him some back up. 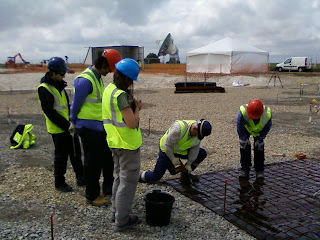 So, thanks Harry! We know it was a lot of work and that you'll be aching for the next few weeks, but we really appreciate it!
Posted by Karen Masters at 9:32 AM