Royal Opening for the LOFAR Core

As described in this press release from ASTRON, the LOFAR core was opened today in the Netherland by their Queen - Queen Beatrix.

The world’s largest radio telescope was officially launched at a special ceremony in the Netherlands attended by astronomers from the UK and many other countries.

Queen Beatrix of the Netherlands formally opened LOFAR, which stands for Low Frequency Array, on Saturday 12 June. Representatives from consortia in France, Germany, the Netherlands, Sweden, and the United Kingdom then officially signed the memorandum that kicks off their scientific collaboration in LOFAR. The all-electronic ‘next generation’ telescope developed by ASTRON can now offer to astronomers the joint use of a network of antennae that spreads from its core region in the northeast of the Netherlands to distances of thousands of kilometers across Europe. It includes 96 antennae installed last week (7-11 June) at the Chilbolton Observatory in Hampshire].

Dr. René Vermeulen, Director of the Radio Observatory at ASTRON, is delighted about the international collaboration. He says: “With its European dimension LOFAR will serve a large international community of astronomers to study the Universe at the lowest frequencies accessible from the Earth in astounding detail.”

LOFAR uses sophisticated computing and high speed internet to combine all the signals to survey the sky in great detail. The giant telescope will enable scientists to study how distant galaxies take shape, to find out when the early Universe was first lit up, to probe the properties of energetic cosmic particles, to map magnetised structures all across the sky, and to monitor the sun’s activity as well as a wide range of variable and explosive celestial objects. It is a pathfinder for the development of a global telescope, the Square Kilometer Array (SKA).

Professor Rob Fender, of the University of Southampton, is the project leader of LOFAR-UK and represented the UK consortium to sign an International Memorandum of Understanding at the inauguration ceremony.

Rob says: “When completed, LOFAR will consist of thousands of antennae spread across stations throughout Europe, of which Chilbolton is one. Stations are already built or under construction in the Netherlands, Germany, France and Sweden. Signals from the antennae are brought together by a supercomputer in the Netherlands and give a very wide view of the sky.

“At Southampton, we will be using LOFAR for research into very explosive and rapid phenomena such as black holes, neutron stars and pulsars."

Here is the collage of images of Chilbolton used to illustrate the UK contribution to LOFAR in the opening ceremony. That's LOFAR station UK608 in official terms! 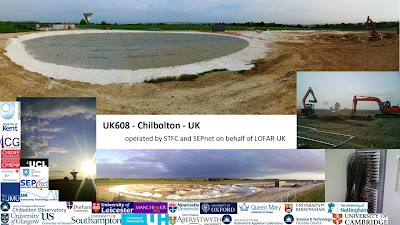