You see, the difference is that the very centre tile will not be an antenna. Instead, it is just a tile. It will have the front end elements (to maintain RF coupling to its neighbours) and will have the exact same outer shell. But the signal that goes into it is terminated immediately and it has no cables.

The main purpose of this dummy tile is to maintain a uniform surface across the array for wind-loading. The 96 is a good round number (in digital processing terms) for the handling of the signal data. However, 96 is not symmetrical when put into an antenna pattern.

Originally, in other LOFAR arrays, the centre tile was simply omitted. But it was found that on the other stations that had already been completed, turbulence cells were being generated as the wind went over the gap. Thus, all new stations are being fitted with a dummy tile in the centre.

In this cable schematic for the HBA field, the tile layout is clearly visible showing the missing "antenna" at the centre of the array. However, this is where a dummy tile will be placed, thus resulting in a uniformly black plane of tiles on the finished field. 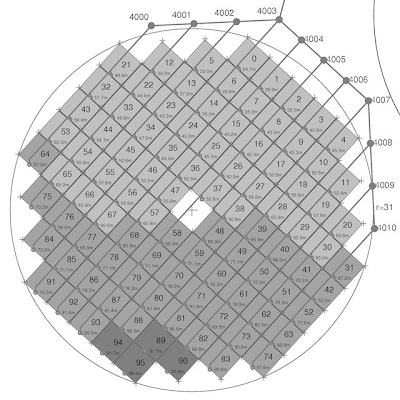 Posted by Karen Masters at 9:43 PM