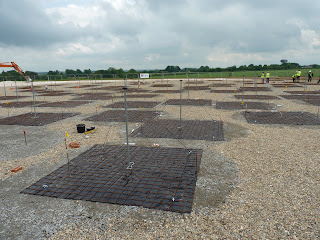 Up to the site again today, my last visit during LBA build week. The progress is amazing and barring some catastrophe or a dose of traditional british weather the construction should be easily wrapped up by tomorrow. Still lots more to do after that, of course, but its a major milestone. Lots of press at the site again today too !

Here's another selection of photos 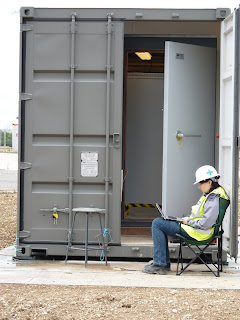 Elizabeth is sitting there all week in case we need some first aid - another piece of sterling volunteer work - thanks !

The cabinet is where all the cables from the 96 LBAs and 96 HBA tiles all meet, the signal is processed and then starts on its journey to the BlueGene supercomputer in Groningen in The Netherlands (don't forget, this coming Saturday - June 12 - is the official inauguration of LOFAR by the Dutch Queen, Beatrix) 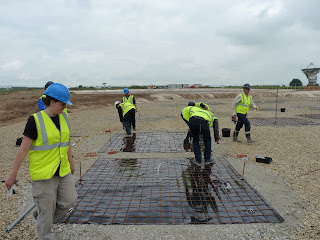 3. Wife and Husband (Judith Croston and Martin Hardcastle) in a race leading side-by-side LBA construction (they're the two in the blue hats, as team leaders).

Also note Harry Smith marching off to drill something else.. 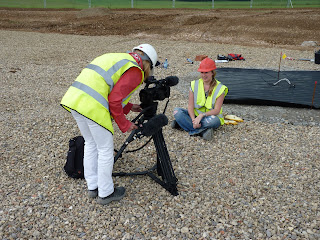 The past few days have seen ITV, BBC (both Sky at Night and Horizon) as well as a whole host of radio shows, on the site and in other forms of contact (quite a few radio interviews).

Also lots of coverage in the national press, e.g.

- Well done the outreach team for generating such interest.

That's it from me for this week, I'm up at 5am tomorrow to fly to The Netherlands to attend the inauguration and sign the International LOFAR Telescope (ILT) Memorandum of Understanding (MoU) as representative of the UK. Should be fun.. now what to say to Queen B?
Posted by Rob Fender at 5:18 PM