A hydrogen atom consists of a proton and an electron, and both of these particles have a quantum property called spin, which is related to their angular momentum. It is a similar concept to rotation around the axis, for example of the Earth. The proton and electron can have a configuration where their spins are pointing in the same direction (parallel) or pointing in opposite directions (anti-parallel). The first configuration has a slightly higher energy than the second configuration.

When a hydrogen atom makes a transition from the parallel to the anti-parallel state, it will emit some electromagnetic radiation with a wavelength of 21 cm (1420 MHz). Alternatively, a hydrogen atom in the anti-parallel state can change to the parallel state by absorbing electromagnetic radiation with a wavelength of 21 cm. This transition is extremely weak, but the masses of hydrogen in galaxies are so large that it can be detected in nearby galaxies. Due to the fact that it occurs at a very specific frequency (or wavelength) this type of emission is known as line emission in contrast to continuum emission, such as free-free and synchrotron radiation.

LOFAR will use this physical process to study the ‘Epoch of Reionisation’. In the early Universe, the vast majority of hydrogen in the Universe was in the form of neutral atoms unlike nowadays, when it is mostly ionised plasma so the protons and electrons are separated. As the first stars switched on, they produced ionising radiation that began to separate neutral hydrogen atoms into electrons and protons (also referred to as ions). We use the prefix ‘Re-‘ in Reionisation because shortly after the Big Bang the Universe was ionised, and it later cooled down and electrons and protons joined to form neutral Hydrogen atoms. Hence the epoch of Reionisation is the second epoch when the Universe was ionised.

The epoch of Reionisation occurred when the scale of the Universe was significantly smaller, approximately one seventh of the present scale or smaller. The radiation at 21 cm has scaled up with the Universe, and reaches us with a wavelength of about 1.5 metres or longer (corresponding to a frequency of 200 MHz or less) and it is therefore observable with LOFAR. Studies of the 21 cm line can yield information on the density of neutral hydrogen and its distribution in the early Universe.

The figure below shows the signal of the 21 cm line from the epoch of reionization which LOFAR is expected to measure. The colour scale shows the difference in the observed intensity caused by regions with a high or low content of neutral hydrogen: light regions have the most neutral hydrogen compared to the average, dark have the least (remember the average changes with epoch, so we are looking at the contrast). The vertical axis shows the physical extent of the regions, the units are megaparsecs, Mpc, which correspond to approximately three million light years. The horizontal axis corresponds to observed frequency (in MHz), with lower frequencies looking at earlier epochs when the Universe was younger. This image was produced by Garrelt Mellema using a simulation of the young Universe by Ilian Iliev. 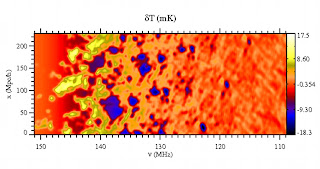 Against a strong source of radiation, for example synchrotron emission from a background source, the neutral hydrogen will leave an imprint of absorption due to the transition at 21 cm. Below is a simulation of the spectrum of such a strong source. The horizontal axis is frequency, in MHz, the vertical axis is flux density (another measure of intensity). The source is at redshift 10, and at this redshift the 21 cm line appears at 129 MHz. The absorption from neutral hydrogen can be seen as strong dips in the spectrum to the right of 129 MHz. The solid line serves as a guide to the eye, it shows what the spectrum would have looked like without any absorption. Only neutral hydrogen between us and the source can cause absorption, and hence the spectrum is only affected at frequencies higher than 129 MHz. Image credit: C.L. Carilli, N. Gnedin, S. Furlanetto, F. Owen. 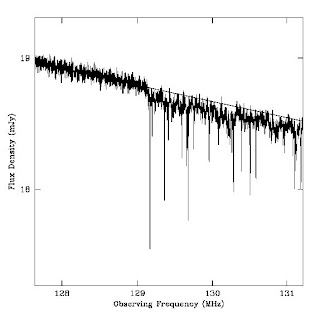 Posted by Alejo Martinez-Sansigre at 1:56 PM