During the digging of the trenches, the folks at Chilbolton have occasionally come up with some unexpected finds. One of these was some brickwork, close to a cable exit point on the High-Band Array. 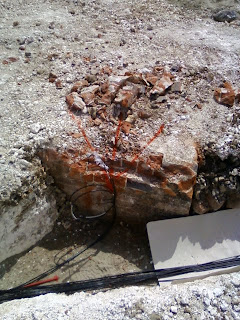 From comparing the location to some of the historical maps, they suspect it may be part of a World War II searchlight facility. The Chilbolton Observatory site was once an RAF airfield (also see this Wikipedia article on RAF Chilbolton), used during the Second World War. According to old maps, there was a searchlight installation near this position and perhaps the brickwork is part of the surrounding structure.

It was certainly extremely hard and they had great difficulty in dealing with it, but it's all taken care of now.
Posted by Karen Masters at 3:06 PM