Below is a sketch of an electron (blue circle) passing near an ion (red circle) and losing energy by free-free emission (green wave). 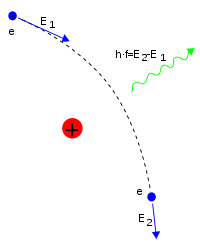 For free-free emission to occur, a fast electron must pass close to another charged particle. This form of radiation will therefore occur more often in regions of high density, because the electron will have a higher chance to come close to a charged particle that will perturb it. However, for free-free emission to occur, the gas must also be ionised, so that the electrons are free from the protons, rather than bound in a hydrogen atom. The amount of free-free emission depends on the temperature of the ionised gas and it is a type of thermal emission, and because the emission is continuous with frequency, it is described also as continuum emission. 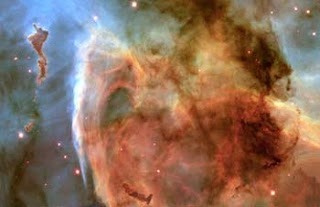 Posted by Alejo Martinez-Sansigre at 12:32 PM