As the HBAs are being installed now we thought you might like a post about what exactly a HBA (high band antenna) consists of. As you'll see they're rather more complex than the LBAs

Each HBA tile is composed of 16 crossed bow-tie antennas in a 4 x 4 grid. This grid is exposed at first, but during the assembly it is covered with polystyrene lids and then a polyurethane cover. Under the entire tile is a wire mesh, which acts as a backplane (like the ground plane wire mesh the LBAs had).

The honey-comb structure which holds the individual antennas. 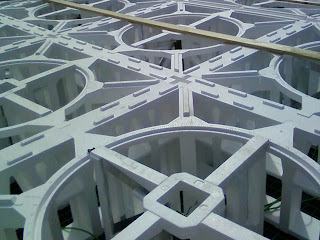 A shot looking through a still-vertical tile at the 25m dish in the background. 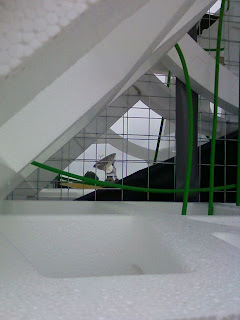 Posted by Karen Masters at 9:39 AM