Today is an exciting day for UK radio astronomy as eMERLIN has released its first image. This dramatic image shows the Double Quasar. In the image, light from a quasar billions of light years away is bent around a foreground galaxy by the curvature of space. A quasar is a galaxy powered by a super-massive black hole, leading to the ejection of jets of matter moving at almost the speed of light - one of which can be seen arcing to the left in the image.
e-MERLIN is an array of seven radio telescopes, spanning 217km, connected by a new optical fibre network to Jodrell Bank Observatory. 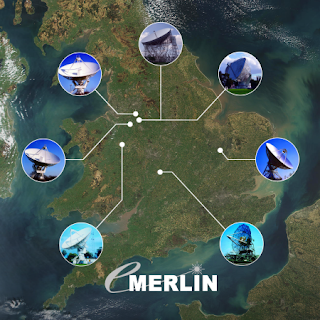 As a radio telescope array eMERLIN of course has many similarities to LOFAR, but to readers familiar with LOFAR there are also several big differences. To start with eMERLIN observes at much higher frequences (shorter wavelengths) than LOFAR. The frequency (or equivalently wavelength) of electromagnetic radiation which can be detected using radio technology stretches all the way from sub-mm radiation (at many GHz) down to the limit set by the ionosphere at 30MHz (many metres in wavelength). eMERLIN detects radiation in three radio bands at roughly 1.5, 5 and 22 GHz, while LOFAR has two bands at much lower frequency (LBA at 30 - 80 MHz and the HBA at 120 - 240 MHz). This change in frequency means that the tecnhology for the antennas is much different. LOFAR as you know uses many dipole antennas all connected together by software for each "station". This would not work for the frequencies observed by eMERLIN which requires each point in the array to be a "traditional" radio antenna (as illustrated above).
This e-MERLIN image demonstrates the successful transmission of wide-bandwidth digitised signals from all the telescopes remote from Jodrell Bank over the optical fibre network. This initial image, taken at a frequency of roughly 6.5 GHz, has an angular resolution of 50 milli-arcseconds, similar to the resolution of the Hubble Space Telescope. The new system is already approaching 3 times the sensitivity of the previous radio-linked MERLIN telescope. This will result in a very substantial (around a factor 5) further increase in sensitivity. Operations at full sensitivity, (achieved by including the Lovell telescope and upgrades of the bandwidths in the data links) are expected in 2011.
For more details see the press release at Jodrell Bank.
Posted by Karen Masters at 11:24 AM