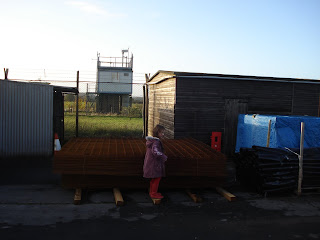 Last Sunday I dragged the family up to Chilbolton to see the first delivered parts, the marked out station location and test pits, all dug in preparation for construction early in the new year. After five years of UK effort, and a decade of personal LOFAR involvement (so far!) it was great to see the project getting to this stage. Owain Davies kindly opened up the site for us in the middle of his weekend.

On the left you can see a small Fender oblivious to the high technology which are the LBA ground planes in the background... 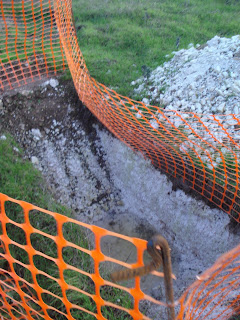 Owain also drove us around the station site in the STFC landrover, and pointed out to us how the test pits reveal the striking change from soil to chalk only 20 cm below the surface.

There are ideas about shaping this chalk layer to aid with drain-off of water from the site.

Anyway, although there are still major decisions to be taken about things like the mode and route of our data links to The Netherlands, this first step in the construction of the Chilbolton station is a very significant one for LOFAR-UK.
Posted by Rob Fender at 1:51 PM