The first parts for the LOFAR array arrived safely in Chilbolton yesterday morning after a long trip over from Dwingloo.

Yesterday morning a group of LOFAR scientists from Portsmouth (Prof. Bob Nichol, Dr. Alejo Martinez-Sansigre, PhD student Hana Schumacher and myself) drove up to Chilbolton to see the arrival of the first parts with Owain Davies and Derek McKay, and get a tour around the site.

This first pictures shows the delivery men from the Netherlands unloading the ground planes (the part of the equipment which actually collects the radio waves for the longest frequency part of the array). This is standard metal mesh used to reinforce concrete in the Netherlands. Each weighs about 30kgs - here they are unloading half of the 96 in total which will be laid out in Chilbolton. 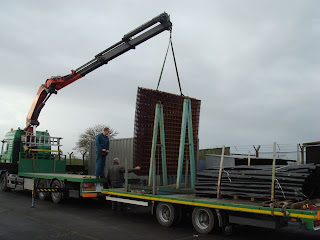 You can see in the background that the container (grey box) has already been unloaded, while in the foreground the ground sheets (rolled up black plastic - used to stop weeds growing up through the wire mesh) are still on the transport.

It was a rainy morning in Chilbolton, but the clouds cleared and a rainbow came out as we watched the action. 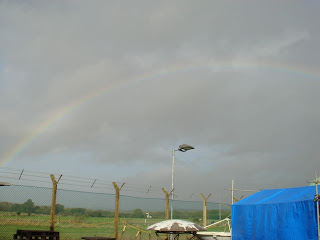 Prof. Bob Nichol and Dr. Alejo Martinez-Sansigre check we have the right container, and wonder how to go about breaking the customs seal to have a look inside. 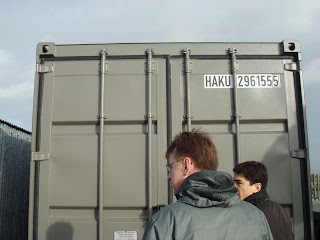 More parts, including the electrical components for the LBAs (low band arrays) are expected next week, after which test construction of the LBA can begin. For now these parts and container will have a temporary home in the carpark next to the 25m antenna at Chilbolton while site preparation is completed at the final LOFAR-Chilbolton location on a more remote part of the site.
Posted by Karen Masters at 1:02 PM