In the Netherlands a stamp has been issued showing the location of LOFAR stations across Europe as part of the celebrations for IYA2009. You can see the Chilbolton station just makes it into the picture on the extreme left illustrating how LOFAR-UK adds to the resolution of LOFAR (ie. how sharp the images it will eventually be able to make) by creating some of the longest baselines. The addition of these outer international stations to the Dutch core make a radio telescope which is effectively as large as northern Europe! (Stations in France and Sweden are not on the stamp, but make it into the outer frame if you buy a block of ten.) 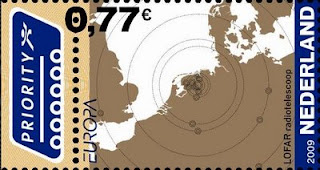