A paper appears on the arxiv today with new images of the centre of nearby elliptical galaxy M87, taken with the Dutch LOFAR stations.

M87 (also known at Virgo-A) is one of the two massive elliptical galaxies found at the centre of our nearest cluster of galaxies (the Virgo cluster).

In the centre of M87 is a well know actively accreting supermassive black hole, which is emitting jets of energetic particles which emit significant amounts of radio. These jets are even (just) visible in optical images of M87 (the blue line below).


M87 has often been a poster child for radio astronomy images. These images of the jet taken by the NRAO's VLA can be seen in many talks about radio galaxies and AGN.

And especially this series of images zooming into the central regions.


The paper on the arxiv today used observations of M87 with both the HBA and LBA arrays of LOFAR. The Dutch stations only were used in this observation - adding in international stations like Chilbolton will be able to increase the resolution even further, and I will look forward to seeing that in the future.

I have extracted two of the images from the paper. This first was taken with the HBA at 140 MHz (2.1 m) and shows an area 15x15 arcmin in size (same as the VLA image above, but at wavelengths more than twice as large). 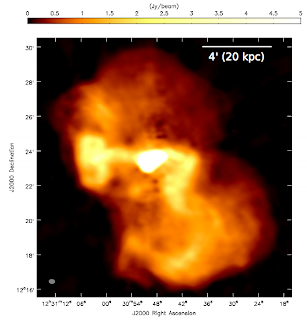 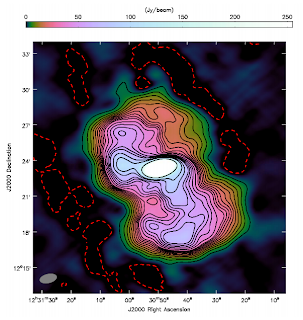 These new observations at lower frequencies than ever before allow scientists to better constrain the spectral shape of the radio emission from the jets, which in turn can be used to constrain the details of how the supermassive black hole in the centre of M87 is able to power these extremely extended emission regions.

Posted by Karen Masters at 1:51 PM