Lofar Planetarium shows at the University of Southampton's community day 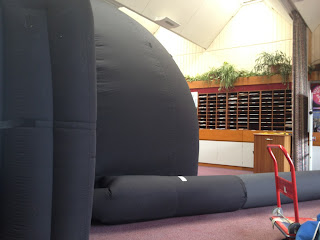 As part of the University's 60@60 Community day on Saturday 30th June 2012 the Soton Astrodome team, lead by myself (Sadie Jones) put on 5- 1 hour long LOFAR-UK themed planetarium shows for the general public.

Members of the public were lured into the Physics & Astronomy Department by a 'dummy' lofar antenna outside the building seen below. 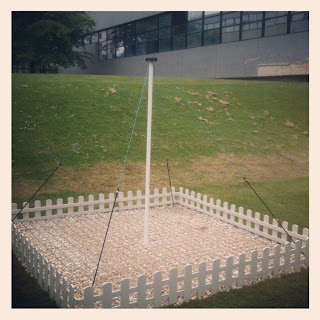 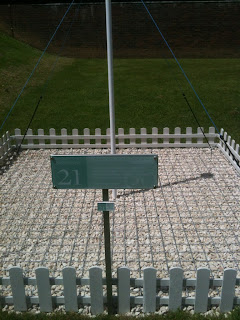 When inside the department members of the public were invited to sit on the mats in our planetarium and watch a 50 minute show. These shows involved watching 4 short videos followed by an interactive tour the night sky above Southampton, including several LOFAR images using the (FREE to download) Stellarium software.

The first video was an edited version of 'We are Astronomers' which detailed how astronomers in general use the Electromagnetic Spectrum to do exciting astronomy.

The second video was an edited version of the What is LOFAR ? video made by ASTRON. In this edited version I focused on the simple and cheap antennas used by LOFAR and it's ability to look at all the sky, all the time. This video also details the use of LOFAR for looking at pulsars, transients and space weather.

The third video shown was about the building of the LOFAR-UK station in Chilbolton and is introduced by Professor Bob Nichol from Portsmouth. This video also features me (Sadie), as one of the PhD students (aka. free labour) wielding a hammer and attaching the amplifier to an LBA. Featured also are many other PhD students from other Universities such as Portsmouth & Oxford. I end this video along the lines of Professor Bob's final thoughts on aliens with some ominous scary music and an image of a massive aliens. To see the video (made by the Uni of Portsmouth) on youtube click here.

The fourth and final short film shows the million galaxies imaged by the Sloan digital sky survey. This movie ends by going right out to the Cosmic Microwave Background (CMB) at the edge of the observable universe. I explain that lofar will be used for similar radio surveys and will hopefully reveal a further 10 million active galaxies. It will also look at the Epoch of Reionisation, a time just after the big bang (after the CMB radiation) when the Hydrogen from the early universe was starting to form galaxies.

The interactive Stellarium show featured both optical and lofar images of M87, M101 and the Crab Nebula. 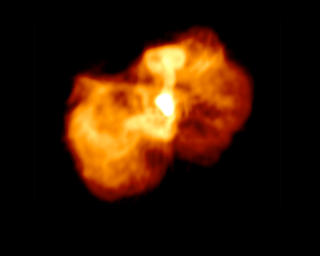 The first planetarium show which started at 10am was for staff members from the Faculty of Physics and Applied science and their families. The first show included mainly young children with their parents, including Professor Rob Fender and his wife and children.

The remaining 4 shows (at 11,12,2 & 3pm) were all full to capacity with 30 people in each and contained manily adults with only 10% of the rest of the audience children.

We got asked so many great questions from members of the community and they were all really excited by the fact this 'cheap' radio telescope was both 'local' and doing such exciting astronomy.

I posed 2 questions to those who came to the show. One question for the adults and another for the children. Some of the best answers to the questions are shown below:

What are your thoughts on the LOFAR telescope?

"What good value this type of Astronomy is!"

Have you learnt anything new today? What did you learn?

There is a big telescope in Chile

We learnt that there are lots of stars in the galaxy.

Telescopes are great to look at.

I learnt about black holes !

It is so great!

We learnt that black holes are very big!

We learnt about lots of things :)

The future sees us improving on of this prototype LOFAR planetarium show and then making use of it for other open days and in local schools (probably for A-level and GCSE Astronomy students). We aim to get as many people excited about LOFAR as possible:)